We, Michael & Elske Smeyers, are the proud owners of Noordvaarder Zeilreizen with the two beautiful sailing ships Noordaarder & Victoria S. We warmly welcome our guests on board. Sailing is our passion and we like to convey that feeling to our guests. Optimal enjoyment of the elements wind, water & tide. Every trip is an adventure for us again. With enthusiasm and years of experience on the Wadden Sea and the IJsselmeer, we are happy to take you to this particularly beautiful sailing area, which is a World Heritage Site.

Since 1996 on the Noordvaarder, first as a sailor

Michael has been sailing on the Noordvaarder since 1996, first as a sailor and from 2000 as a skipper. He has owned the Noordvaarder since 2002. He has a diploma in helmsman and sailed for many years outside the sailing season as a helmsman on the world seas. He likes to transfer his great nautical knowledge to the guests who are interested in it. In the winter months he is active in the maintenance of both ships. Elske has been very fond of sailing since childhood. She has experience in skutsjes, participated in IFKS competitions and sailboat deliveries in the Caribbean and the Pacific. She started as a sailor on charter and has since 2000 been a skipper on various clippers and tjalks. Elske has been co-owner of the Noorvaarder since 2009. Together we have three small sailors: Mara, Keano and Mylan. And ship dog Vlek is always up for a round through the dunes or a dip in the sea.

Our crew considers the experience of sailing, good service and safe sailing to be of paramount importance!

Michael and Elske alternate as skippers and sail together with sailor Philipp. In 2018 he also sailed for us on both the Victoria S and the Noordvaarder. He likes to teach you the ins and outs on deck, but he also likes to make guitar music in the evening by a campfire.

Crew of the Victoria S

Arnaud Flierman is the skipper of the Victoria S in the 2019 season. He is a very experienced skipper in the sailing fleet of traditional ships and friendly host. He sails fanatically and likes to show his guests the most beautiful places on the Wadden Sea.

Are you sailing with us? We know the way! 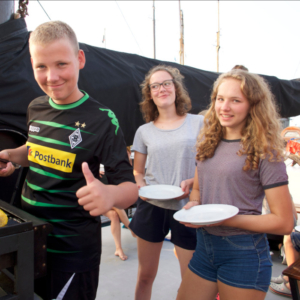 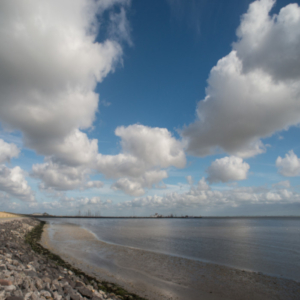 ” What a beautiful boat, super neat and clean. Had a great sailing weekend with the hospitable Elske and Michael Smeyers! “